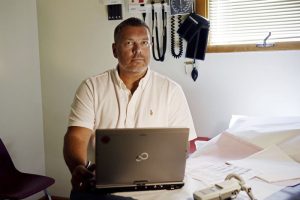 He said those patients did not have transportation, and were grateful for a location within walking distance.

“It revealed to me the extent of the problem we have in rural West Virginia.”

A handful of health care providers, like Flowers, who travel to offer their services or practice in other specialties, provide prenatal care in Fayette, Summers and Wyoming counties. Their patients, however, must travel outside the county to deliver their babies.

Oftentimes in the counties with multiple licensed OB/GYNs, the doctors are located in the same town or city. For example, all three providers in Nicholas County are located in Summersville.

Raleigh County fares the best in terms of number of providers in the southern region, but the 18 providers (10 physicians, one physician assistant, one nurse practitioner and six certified nurse midwives) are located in Beckley, and nearly all are located at AccessHealth.

AccessHealth is the only practice in Beckley, where 232 residents gave birth in 2014, offering obstetric services with delivery nearby. Dr. David Patton, a Charleston OB/GYN, offers prenatal visits in Beckley, but patients must deliver in Charleston.

The American College of Obstetrics and Gynecology (ACOG) reports prenatal care initiation in the first trimester is lower for mothers in more rural areas compared with suburban areas.

In Raleigh and Greenbrier counties, with obstetricians available in Beckley and Lewisburg, between 80 and 85 percent of women initiated prenatal care in their first trimester. In Monroe, Summers and Wyoming counties, however, the percentages ranged from 72.4 to 75.9.

The DHHR Bureau for Public Health Vital Statistics report shows 2.5 percent of the 126 Monroe County babies born in 2014 received no prenatal care at all before birth.

Infants in rural settings are also more likely to experience adverse birth outcomes, such as low birth weight and preterm birth, according to the ACOG.

Dr. Rahul Gupta, state health officer and commissioner of the West Virginia Bureau for Public Health, said lack of access to care is one of several reasons for poor infant outcomes.

“We’re trying to map that out, to see where are those barriers. That’s a work in progress,” Gupta said. “Specifically for southern West Virginia, it’s always been a challenge finding those licensed practitioners who are able to be available.”

He continued, “It’s a challenge of living in a rural state, but we’re not alone in this challenge. Other rural states experience this as well. Everybody is trying to develop a model, but there is no ideal model there.”

Flowers said southwestern Virginian mothers also have few options, which prompted him to reach out to Low Moor, Va., because Greenbrier County and Allegheny County border one another.

One of the solutions offered at the Maternity Care Provider Shortage Committee, Flowers said, is to look at each underserved area individually and identify health care professionals who could provide outreach services.

“In our area, since we’re the only OB practice, that’s why we went out to Summers County and the western end of Greenbrier County. We have a lot of patients from Nicholas and Fayette coming to Rainelle.”

Another solution, Flowers said, could be found with the state’s medical universities, such as West Virginia University and Marshall University, which could provide outreach to rural areas for specialty services.

Programs, some of which are already in existence, offering forgiveness of student loans as an incentive to practice in rural areas, must be utilized, Flowers said.

The Health Sciences Service Program, a state-funded incentive program administered by the West Virginia Higher Education Policy Commission (WVHEPC) since 1995, provides financial awards to health professionals who agree to practice in underserved areas of the state upon completion of their education and training.

Since 2011, WVU has offered a Community and Rural Health Medical Student Scholarship Program, which awards $25,000 for each year of a student’s commitment to work in a rural health clinic, federally-qualified health center or Primary Care Health Professions Shortage Area (HPSA) in West Virginia. Students can participate in the program for up to four years, for a total of $100,000.

Primary care includes family medicine, general internal medicine, OB/GYN, psychiatry, general surgery, pediatrics and rural emergency medicine. April L. Vestal, director of the WVU Institute for Community and Rural Health, said none of the 15 recipients of this scholarship have chosen OB/GYN as their specialty. Most are practicing family medicine or pediatrics.

In 2017, WVU graduated 105 medical students, nine of whom selected OB/GYN for further training.

No such incentives are currently available at Marshall University, but Leah C. Payne, director of public affairs for schools of medicine and pharmacy, said the school is currently engaged in developing an internal financial incentive program aimed at keeping graduates in-state and encouraging them to practice in rural areas.

Flowers admits the economic realities of medicine make it difficult for physicians to practice in rural areas.

“Being from and growing up in rural West Virginia, I’ve always viewed it as part of my obligation as a physician who’s gotten so much from the state of West Virginia. Growing up, going to school at WVU, coming home, making a good living – I wanted to be a good part of my community.”

While he considers service to his community his obligation, he said it is extremely difficult to recruit physicians to rural West Virginia – areas with limited offerings of shopping, restaurants and sporting events.

“It takes time to find the special individuals. Generally, it’s professionals, physicians who have ties to West Virginia who have that feeling of love for our state that you want to recruit back to provide services to these areas.”

Both he and Gupta said physicians have to go where they have a large enough patient load to sustain their practice, which poses an issue in areas with a declining population and declining birth rates.

The DHHR Bureau for Public Health Vital Statistics report shows 234 Wyoming County women gave birth in 2014, down by 30 births from 2010.

Women in rural areas are also more likely to be living in poverty – the West Virginia Center on Budget and Policy reports nearly 20 percent of West Virginia women and girls live in poverty, and more than half of the state’s births are financed by Medicaid.

“These women can’t afford to come to their prenatal care – either they don’t have reliable transportation or may not have the money for gas to drive that far,” said Beth Hughes Ross, a Certified Nurse-Midwife at AccessHealth in Beckley and the current president of the West Virginia chapter of the American College of Nurse-Midwives.

Like Flowers’ first patients in Rainelle, Ross said transportation is nonexistent for many Medicaid patients. Flowers said his patient population at his satellite locations is much more reliant on Medicaid than his patients in Lewisburg.

West Virginia is one of the most Medicaid dependent states in the nation. In McDowell County, West Virginias for Affordable Healthcare reported 48 percent of residents were on Medicaid in 2015.

While McDowell County mothers can still receive prenatal care at Welch Community Hospital, they must travel to Beckley for delivery services. Ross said she knows some patients who drive an hour and a half just for prenatal appointments.

To help his patients access all services available to them, Dr. Flowers’ practice partners with other agencies, such as Right from the Start, a WV DHHR Bureau for Public Health program aiming to help women have healthy pregnancies, and Birth to Three, a statewide system of services to support children under age three who have a delay in their development or may be at risk of having a delay.

McKinney said the services are under-utilized. Any Medicaid recipient in need of transportation to health care providers can schedule a ride by calling 1-844-549-8353.

“Her car got repossessed and she couldn’t get to her appointments,” Ross said, reciting the laundry list of medical care she would have received during that time frame, including an anatomy ultrasound; an injection of Rh immunoglobulin (RhIg) if the mother’s blood type was negative and the baby’s was positive; a gestational diabetes screening; an anemia screening; and all the education that goes hand-in-hand with prenatal visits.

With providers nearby, McMillion said the mother is more likely to go. She said consistent prenatal care is important because it can greatly improve outcomes for mom and baby.

Crystal Gwinn, also a Regional Care Coordinator for RFTS with CASEWV, suggested combined services under one roof could be one solution for low-income mothers.

She said if prenatal doctor visits could be located with WIC (a supplemental nutrition program for women, infants and children) or health department services, an expectant mother’s needs could be met in one visit, versus multiple appointments throughout the month.

“A lot of these moms don’t even have cars … so if you could combine these things, mom’s getting one ride one day a month. She’s more apt to go to those appointments.”

Gwinn said she believes such a system would be relatively easy to implement and manage if all the agencies could work toward that common goal.

“It would take work and planning, but it’s highly possible.”