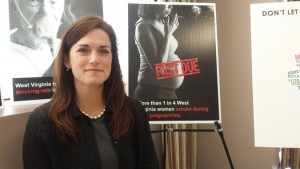 Amy Tolliver with the West Virginia Perinatal Partnership says a sharp hike in cigarette taxes would be a win-win. (Dan Heyman)

CHARLESTON, W.Va. – West Virginia pregnancy-care providers want lawmakers to “pass the buck” by raising the state cigarette tax by $1 a pack.  With a big hole in the state budget, the $150 million more a year in tobacco revenue looks appealing. But doctors here also hope to reduce the rate of smoking by pregnant women here, which now is the highest in the country.

Amy Tolliver, director of the West Virginia Perinatal Partnership, said the sticker shock from a big tax hike would help, and as a result reduce problems such as low birth-weight babies. “Smoking in pregnancy drives our pre-term birth rate, it causes an impact in the fetal brain development, and it’s costing us as a state,” she said.

Critics oppose raising any taxes, and have argued that this one would fall hardest on the poor.  Supporters have said the state spends more than $1 billion a year on smoking-related health-care costs, but only brings in 17 percent of that through tobacco taxes.

According to projections from the Campaign for Tobacco-Free Kids, the tax hike would mean 2,700 fewer West Virginia pregnancies affected by smoking over five years, resulting in $6.5 million in health-care savings.  Moreover, Tolliver said those premature and low birth-weight babies have lifelong health problems. From day one, they’re more likely to end up in intensive care, which is expensive. “If we could impact that and reduce the number of pre-term births and those babies that need additional high-level care in our neonatal intensive care units,” she said, “we could impact the Medicaid budget.”

Critics of the tax hike have also pointed out that smokers will resent it. However, Tolliver said most smokers want to quit long before they do, and research has proved that higher tobacco prices help them quit. She said that’s especially true for pregnant women.

“Women are driven to try to quit smoking. They want to do the best thing for their baby,” she said. “Pregnancy is a time when we can have the biggest impact on helping those women quit.”