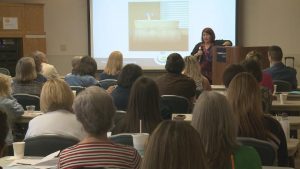 PARKERSBURG, W.Va. (WTAP) – Candy Cooley, a recovery coach at West Virginia University’s Drug Free Moms and Babies Project, told her story of overcoming addiction at the “Caring for Babies Who are Drug Affected – from Hospital to Home” seminar at Camden Clark Medical Center on Friday.

Cooley spoke about being addicted to drugs during her son’s teenage years and her son’s struggle with addiction himself. Her message to the dozens of attendees was to treat people struggling with addiction like human beings.

“They don’t want to be treated like they’re less than and I think that whenever they’re treated that way, that makes it harder for someone to stop using so I think it’s important that people are uplifted and encouraged,” Cooley said.

Cooley said she’s been clean for close to 7 years and now has a passion to break the stigma of addiction.

“We’re moms and dad and brothers and sisters we’re hardworking people I know so many people who are artistic and musically inclined and hard workers and I want people to see that, I want people to know that we’re just like anyone else,” she said.

The program Cooley works for provides resources to pregnant women who are dealing with substance abuse. She was one of several speakers at the educational seminar that taught healthcare providers and community members how to better care for drug-affected newborns.

Neonatal abstinence syndrome is a withdrawal syndrome that occurs after prenatal exposure to drugs is discontinued at birth. Infants with NAS often require longer hospital stays to monitor and treat withdrawal symptoms such as tremors, feeding difficulties, excessive crying, and sensitivity to stimuli.

Stefan Maxwell, the director of the Neonatal Intensive Care Unit at CAMC Women and Children’s Hospital, says, “It’s almost as if they’re super sensitive to all of the stimuli that are out there such as light, sound, and touch.”

The incidence rate of NAS in West Virginia in 2017 is 50.6 cases per 1,000 births. This number is reported by the West Virginia Department of Health and Human Resources.

“Our job is to try a non-pharmacological approach first to keep mom and baby together in a calm environment and hopefully with breastfeeding depending on what substances are being used and if we have to use we’ll use pharmacology to help them get through this but over a period of time they do hopefully get better,” Dr. Maxwell said.

The seminar was sponsored by the WV Perinatal Partnership in collaboration with Camden Clark Medical Center and the Children’s Home Society of West Virginia.

Research shows cuddling helps support the development and growth of infants. Camden Clark has a cuddler program, which allows people to cuddle babies, read to them, and even sing to them to provide stimulation.

The goal of the seminar was to educate people so they can do their part in combatting the opioid epidemic.

“We need to understand what the issue and that it is a tremendous public health issue it’s not only causing effects on the health of our mothers and babies but also costing the state a vast amount of money of which there are limited resources,” Dr. Maxwell said.