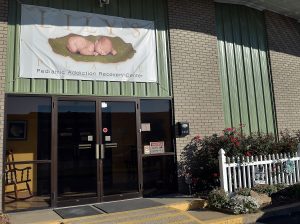 Pic (Lily’s Place is a Huntington-based treatment center for helping drug-addicted babies get through withdrawal.)

In a bid to dilute responsibility for West Virginia’s opioid epidemic, one of the nation’s largest drug distributors is pointing a finger at the most unlikely of targets: Lily’s Place, a Huntington clinic that nurses drug-exposed newborns through withdrawal.

Cardinal Health has notified a federal judge that Lily’s Place could be “wholly or partially” at fault for diverting opioids for illegal use, if a lawsuit proceeds against the drug wholesaler, according to a notice filed in federal court.

Lily’s Place, a nonprofit that has drawn national attention for its lifesaving work with drug-affected newborns and their mothers, is one of nearly 2,000 organizations, businesses and medical professionals that Cardinal Health asserts could potentially be held accountable for the state’s opioid crisis, according to the company’s recent filing in federal court.

The city of Huntington is suing Cardinal Health and other wholesale drug distributors, alleging that the companies’ prescription painkiller shipments helped fuel a heroin epidemic that has ravaged the town with a record number of fatal overdoses. Lily’s Place has a license to dispense methadone and other controlled substances used to wean babies off opioids.

“The very industry that created the opioid problem is trying to defend itself by using an innocent nonprofit that’s working tirelessly to combat the epidemic,” said Don Perdue, a retired Huntington pharmacist and former state lawmaker.

Cardinal Health has indicated it would consider scratching names from the list after the city of Huntington identifies which pharmacies did not break the law.

“If and when a plaintiff admits that a particular pharmacy did not place any suspicious orders and was not the source of diversion, Cardinal Health will consider amending its notice,” said Ellen Barry, a company spokeswoman.

Lily’s Place Executive Director Rebecca Crowder said she was as surprised as anyone that the neonatal drug treatment center would show up in Cardinal Health’s filing, given that the clinic provides medical care to infants born exposed to drugs.

“This proves that no research has been done and that names are being thrown out as a technique to deflect blame,” Crowder said.

“They’re using doctors as human shields,” said Rusty Webb, a lawyer representing Huntington in the lawsuit. “They’re trying to scare everyone in Huntington into believing they’re going to be involved in the lawsuit and trying to bring pressure on the city to stop it. Legally, technically, it’s as dirty as hell.”

Why list the mayor and police department? Cardinal Health said it had good reason.

“By suing us for the damage allegedly done to their communities, they implicate their own local law enforcement and municipal authorities, who were in a position to flag for the [U.S. Drug Enforcement Administration and state Board of Pharmacy the] local pharmacies who may have been acting improperly,” Barry said.

According to the company, Huntington’s lawsuit has essentially implicated all doctors and pharmacies, because the complaint does not state who diverted medications for illicit use.

“It’s up to the plaintiffs to identify the source of the diversion they claim and state which, if any of those pills even came from Cardinal Health,” Barry said. “They have not identified anyone, but rather just put up a total number of pills. By doing so they implicate every pill and everyone who handled every pill regardless of whether it went to a cancer patient or some other legitimate medical need.”

A second Cardinal Health spokesman said the distributor is simply following West Virginia law by notifying the judge assigned to the case the names of others that could potentially be at fault. In addition to doctors and pharmacies, the list includes the U.S. Drug Enforcement Administration, drug manufacturers and other smaller wholesalers that compete against Cardinal Health.

“The notice of non-party fault is a procedural step that Cardinal Health is required by West Virginia law to take now — 180 days after the complaint was served — in order to preserve defenses in the event this matter goes to trial,” said Joe Carey, who runs a New York public relations firm hired by Cardinal Health.

The company has seized on a new law — enacted in 2015 and updated last year — that West Virginia legislators touted as “tort reform” designed to make the state more “business-friendly.” The bill’s language was pulled from “model” legislation recommended by the American Legislative Exchange Council, an industry-backed group known for pushing conservative policies nationwide.

State lawmakers have given the drug companies ammunition to fight against lawsuits filed by cities and counties across the state. The lawsuits seek to hold drug distributors accountable for the opioid epidemic. The wholesalers ship medications from warehouses to pharmacies.

The new law won’t require doctors and clinics like Lily’s Place to pay damages. Instead, the law allows businesses to dilute monetary damages, if a jury rules against them.

If the Huntington case goes to trial, a jury could be asked to fill out a verdict form that lists nearly 2,000 entities — and assign a percentage of blame to any or all of those identified. Only companies named as defendants in the lawsuit, however, could be held liable and required to pay damages.

Cardinal Health never notified Lily’s Place it would be on the company’s massive list of organizations and individuals that could be held at fault for the opioid epidemic, Crowder said. The law doesn’t require Cardinal Health to do so.

In a footnote to the recent filing, Cardinal Health says it “does not believe or assert that any of its customer pharmacies engaged in any diversion of controlled substance, but cannot say that it is not possible that some may have done so without Cardinal Health’s knowledge.”

In January, Cardinal Health paid $20 million to the state of West Virginia to settle a lawsuit that alleged the Dublin, Ohio-based company shipped an excessive number of powerful painkillers to the state.

Oxycodone (sold commercially as OxyContin and Percocet) and hydrocodone (Vicodin and Lortab) are the most widely abused opioid painkillers, and contribute to more overdose deaths in West Virginia than any other prescription drug. West Virginia has the highest drug overdose death rate in the nation, and the number of deaths is rising.

Huntington is the largest city in Cabell County, which has the highest drug overdose death rate in the state.

West Virginia has the highest rate of NAS in the nation, with 33 drug-addicted births per 1,000 babies, according to a recent study.

“We are working to give these babies a healthy future,” Crowder said.

Lily’s Place also provides counseling and treatment to parents — the first NAS center of its kind to do so.

The McDowell County Commission also has filed suit against Cardinal Health, and the company recently listed 334 potential health professionals and organizations that could be used to reduce Cardinal Health’s share of responsibility to keep opioids from being diverted for illegal use.

Cardinal Health also identified Welch Community Hospital — the only hospital in McDowell County — as being potentially at fault for the county’s opioid problem.

Cardinal Health has managed the Welch hospital’s pharmacy for the past 20 years. Cardinal Health’s own employees work at the pharmacy.